The use characteristics of the rental screen determine that it should have the characteristics of "beautiful appearance, light and portable installation, stable and reliable quality", especially the installation problem, they are faced with long-term and repeated use.The other is innovation, in the face of the new demand of the rental market, to have a unique innovation.

In recent years, whether it is TV variety shows or actual performances in theaters, in order to reflect the diversity and differentiation of the stage effect, a large number of LED screens are used in the stage background.In order to let you better understand the stage design with LED display (commonly known as rental screen in the industry), the following for you to explain the relevant knowledge of LED rental screen in detail.

2) To facilitate installation and disassembly, the display box needs to be light and small;In order to ensure the display quality and stitching precision, the display box is required to have high enough strength with the continuous decrease of the display pixel distance.Therefore, the market useful magnesium titanium alloy or carbon fiber material made of display box structure, but the most suitable or aluminum box, iron box is gradually being eliminated. 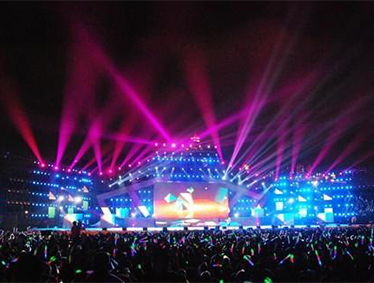 LED display is a display composed of LED matrix.Because the color consistency of the table paste lamp is good, the Angle of view is large, and the color mixing effect is also very good, at present, almost 100% LED display for stage design adopts the three-in-one process of the table paste.Therefore, this paper only describes the related characteristics of the surface lamp, which is mainly composed of chip, bracket, lead, shell and filling adhesive.The commonly used chip size on the market are 6 mil(1mil=0.001in=0.00254cm), 7mil, 8mil, 9mil, 10mil, 12mil, 14mi, etc., the same manufacturer's wafer is divided into different size of chip, the smaller the size, the larger the drive current per unit chip area;On the contrary, the larger the chip size, the smaller the driving current per unit chip area.However, as the chip size changes, its thermal resistance also changes, so the relationship between the chip size and the required driving current is nonlinear under the premise of the same luminance.In order to ensure the high brightness, high consistency and high stability of the table lamp, the chip material selection will be very important work, for example, one of the best combination of domestic chips is Taiwan crystal red LED+ Hangzhou blue and green LED.

The bracket structure is generally divided into PCB structure and iron bracket, copper bracket, copper alloy bracket, etc., the surface of the bracket has two kinds of tinning and silver plating process, the current popular market is iron bracket and copper bracket, the appearance of tinning or silver plating.The weatherability of different stents is different. High-end products in the industry use copper stents more.The bracket should be made of imported red copper and imported PPA materials as far as possible to ensure the heat dissipation and stability of the product.

Similarly, leads also have iron, copper, alloy, gold wire and other options, domestic Heraeus 99.99% gold wire is one of the more suitable products.Most of the filling adhesive used in the display table paste lamp is imported from Japan. Each chip packaging company will adjust the unique formula proportion according to the characteristics of the product, so as to make the table paste lamp have good heat resistance, low light failure and stress adaptability.

In order to improve the contrast of the display screen and reduce the reflection of the stage light, the concept of black body light is introduced in the packaging of the watch paste lamp. The device adopts the all-black body packaging design, so as to better improve the contrast of the display screen.The colloid surface of the device is designed with fog surface to effectively reduce the reflective interference and make the screen display more soft and bright.However, the use of black body lamp will greatly reduce the luminance of the same driving current, so that the LED display with the same luminance requirements will increase the cost of manufacturing.

In order to improve the horizontal viewing Angle of the display and correct the parallax between the left and right of the display level, the packaging manufacturers of the table paste lamps also adopted the "one" glyphs chip arrangement process to replace the early "product" glyphs arrangement.

Need to pay attention to the same display the tables used to stick lamp must use the same batch after testing a selection of light, it is because that use the same piece of wafer partition, the same size of the chip, in the same drive current situation its differ from that of the wavelength of visible light is made, the impurity distribution caused by uneven in (wafer) and general requirements of tables used in the same piece of screen stick lamp various wavelengths must be within + / - 5 nm in a row.For the same reason, different batches of display screens are not allowed to be mixed and spliced in principle.

The concept of LED display module is the product of mass production. In fact, it is already an LED matrix unit. Several modules constitute the display surface of the display box.It is composed of bottom shell (structure), PCB board and mask. The PCB board is uniformly distributed with LED surface paste lamp, driving IC, decoding IC, signal and power related connectors and other electronic components.

The bearing power on the display module is large, and the safety requirements are also high, so the PCB material is generally FR4 and 94V0 plate.And because LED is a planar display product, so the warpage degree of PCB has high requirements, so the general use of 1-level plate.The thickness of the finished product is 1.6mm or 2.0mm to ensure the flatness of the PCB of the display module.In addition, the heat distribution should be fully considered in PCB circuit design to reduce the influence of temperature on the light emitting tube.In the circuit to the power layer and ground layer even wiring, so that the heat distribution is uniform, avoid due to heat caused by the phenomenon of light spots on the table.

In order to make the products meet the standards of EMC, PCB wiring and the packaging of on-board components all need precise design and selection.In PCB system design, filter is used to control the conducted interference.Provide a reasonable decoupling capacitor to make the on-board drive IC work reliably, and reduce the high frequency noise in the power supply, thus reducing EMI.Due to the influence of wire inductance and other parasitic parameters, the response speed of power supply and its power supply conductor is slow, which will make the instantaneous current needed to drive IC in high-speed circuit is insufficient.Reasonably designed bypass or decoupling capacitors and distributed capacitors in the power supply layer can quickly supply current to the device by using the energy storage of the capacitors before the power response.Correct capacitance decoupling is the key to reduce common-mode EMI.Ground design is the key to reduce EMI of the whole board.Use single point grounding, multi-point grounding or mixed grounding mode.Digital ground, analog ground and noise ground are separated, and multi-layer board design is adopted to ensure that there is ground plane layer to reduce common ground impedance.

The cheap drive IC only provides the constant current function for the drive LED (through the current limiting resistor, almost can not be adjusted after the factory), and the LED luminance control comes from the receiver card's off control signal (OE+ Data =PWM), its maximum refresh frequency will be subject to the limit of the highest clock frequency available on the PCB board.And with the PWM adaptive pulse width modulation function of the driver IC, in addition to providing constant current drive function, its static current can also be fine-tuned through the built-in registers (i.e., current gain adjustment).What is more different is that it adjusts the LED luminance of the PWM signal generated by its own inside the chip, that is, as long as the brightness data is provided to it can achieve the LED luminance control at a higher refresh rate.ICs with PWM adaptive pulse width modulation function are perfectly capable of achieving high quality display even at low circuit clock frequencies (for example, the clock frequency is only 6MHz, while conventional ICs require at least 18MHz for the same refresh rate).The reduction of PCB clock frequency has an important positive significance for EMI.

Mask can protect LED light emitting tube and PCB circuit board, so that the product in the process of disassembly and handling to avoid collision LED to the damage of LED lamp and PCB board;At the same time, it can also eliminate the modular visual phenomenon (by setting the surface texture structure), to ensure that the display unit assembly without obvious bright and dark lines;It can also be used for outdoor UV protection (through the raised brim above).

Because the mask is located in front of the LED meter light, its structure will play an important role in the viewing Angle of the entire display.For the same reason, it is the face of the entire display, its color consistency is also very important, so many manufacturers have applied "oil spray" process to increase the appearance of the screen body consistency, and ink color also helps to improve the contrast of the display.

Although the mask is small, it is not easy to manufacture. The hardness and softness of the mask material should be moderate and the flatness should be high. In particular, the manufacturing tolerance becomes very difficult to control due to the shrinkage after demoulding and the influence of ambient temperature.

The HUB is a signal redistribution board that connects the LED module and the receiving card. The simple way is to connect the LED display module with PCB board and row wire.Because tear open outfit frequency is very high, this connection is often prone to the negative aspects of a connection, but with the development of the dance beautiful screen, the screen signal stability of the demand is higher and higher, so now for some high-end products use PCB board with high-speed connectors, adopts screw fastening method, avoid vibration in the process of dismantling and transport HUB board is loose and cause display signal is not stable.

HUB is the bridge between the control system and the display module. Although LED control system providers generally provide HUB products, most large-scale display manufacturers design their own HUB boards.In the design of HUB, EMI design and stability should also be fully considered.The use of high stability connector welding process, no wire connection, all the signals and power supply are transmitted through PCB, so that the product is more concise, more beautiful process, while avoiding the use of wire connection produced by the conduction radiation.The backup redundancy is also adopted in the signal connection, which enhances the stability of the product.

By assembling the above components and the box, the display box is realized.The composition of the whole stage screen is made up of a piece of this box.